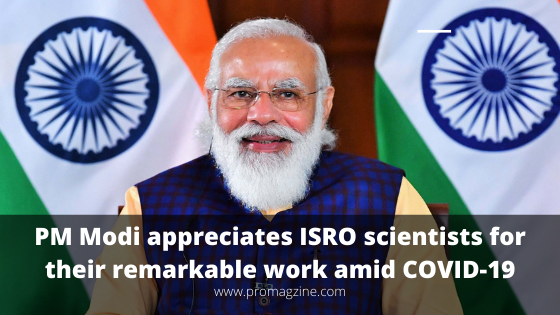 When someone does good work, it is natural to appreciate them for their efforts. The same happened with Indian Prime Minister Narendra Modi as he didn’t fail to appreciate the hard work and commitment of ISRO scientists who went on to complete their launch of the PSLV-C49/EOS-01 Mission by the deadline even despite the coronavirus restrictions.

Modi shared the exciting news on Twitter, “I congratulate @ISRO and India’s space industry for the successful launch of PSLV-C49/EOS-01 Mission today. In the time of COVID-19, our scientists overcame many constraints to meet the deadline.”He also informed the netizens about the achievement by saying, “Nine satellites, including four each from the US and Luxembourg and one from Lithuania, have also been launched in the Mission.”

For the uninformed, the Indian space agency ISRO has introduced the earth observation satellite, EOS-01, onboard the Polar Satellite Launch Vehicle (PSLV) triumphantly on Saturday, i.e. today. The EOS-01 satellite was started at 3:12 pm from Satish Dhawan Space Centre in Andhra Pradesh’s Sriharikota.

The PSLV-C49, the EOS-01 was originated as the primary satellite along with nine other international customer satellites on-board.You would be surprised to know that the launch of EOS-01 was indeed PSLV’s 51st mission.

ISRO’s satellite launch was earlier planned at 3:02 pm, but due to the poor weather, the mission director authorized the launch of PSLV-C49 at 3:12 pm. Everyone could have worked from home in this lockdown period all these months, however, the mission of ISRO is not something that can be done from home.

Hence, the space activity of the engineers, technicians, and employees have to be completed from the lab and the ISRO is happy to have achieved the unusual mission in the testing times of coronavirus. We wish ISRO to launch many more such missions and be victorious in their work now and always.