It’s often said that pictures speak a thousand words, and always keep our memories alive. Babil Khan, the late actor Irrfan Khan’s son, just proved the truth in this saying by sharing some priceless pictures of their family bonding and closeness during a “Holi “celebration. In his Instagram post, he mentioned that he remembered this as the best Holi celebration of his life, The pictures feature his father Irrfan and mother Sutapa Sikdar, him, and a few others. This was a celebration at filmmaker Tigmanshu Dhulia’s house.

All of them are drenched in water and colors and seem to be having a wonderful time together. Babil shared a close bond with his father and very often takes to his social media account to share pics of his father. This is a great source of joy for the fan and followers of the legendary actor Irrfan Khan who left us too soon. His demise shocked the Hindi film industry and his friends and followers from all over the world.

Apart from being an actor known for his superlative performances in Hindi films, Irrfan starred in “The Warrior” a film through which he was noticed by the international film community. His role was that of a warrior who undergoes a spiritual transformation. His other noticeable performances in international cinema were in “The Namesake” “Life of Pi” “Slumdog Millionaire “among others.

Irrfan succumbed to a neuroendocrine tumor which is a rare type of cancer after battling it for 2 years. He was just 54 when he passed away, leaving a deep void in the film industry.

Babil will be following in his father’s footsteps and will enter Bollywood. He is making his debut in acting with ‘Qala” by Clean Slate Filmz on Netflix. This is keenly awaited by all fans and followers of the very popular and much-loved actor late Irrfan Khan.

Jacqueline Fernandez’s venture SheRox gains her recognition in the list of the Times 40 under 40 entrepreneurs.

Sonu Sood appeals to all State Governments to make cremations free in view of the current COVID-19 crisis.

It was June 2020 when talented actor Sushant Singh Rajput passed away. His death caused a lot of…
byHitesh Sharma 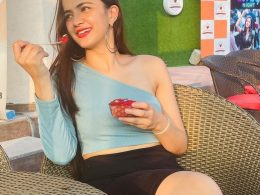 Actress and model Rashalika Sabharwal exemplifies how opportunities can be fine-tuned for success!

After completing her Bachelor of Technology in Electronics and communication, Rashalika Sabharwal, opted for a career switch. Instead…
byHitesh Sharma