Canadian Prime Minister Justin Trudeau lit a ceremonial lamp from his Parliament Hill office while participating in a virtual Diwali celebration.  A tweet put out by him mentioned how Diwali reminded us that good will always prevail.  Diwali he said was a reminder of truth and light. He mentioned how he had joined a virtual celebration earlier in the evening to mark the importance of this festival. He extended his best wishes to everybody celebrating Diwali.

This event was started in 1998 by the late MP Deepak Obhrai, with the intention of bringing Diwali to Parliament Hill and this year marked the 20th year. 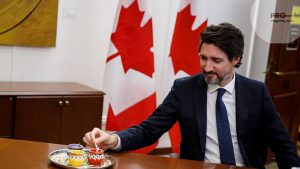 Diwali also known as the festival of lights is a significant festival celebrated by people all across the globe. Canada has a large population of Indians and is therefore an important festival celebrated here with great enthusiasm. Even the most simple and basic celebration in Canada would include gifting of sweets and decoration of the houses with lights and lamps. The City of Toronto before the Pandemic broke out used to organise a “Diwali Mela” annually with a good attendance from the locals.

Canada’s culture over time, with the immigrant populations has become a rich cultural mosaic incorporating various cultures and traditions. There is a rich blend of art, food, literature, music and many other elements from all over the world.

Diwali is one such festival which is celebrated with great fervour and enthusiasm. The Canadian Prime Minister Justin Trudeau has through his virtual participation in the Diwali festival and through his tweet on social media explained the relevance of the festival for those celebrating. He has mentioned how Diwali brings the light and hope of goodness and truth.